“We are forging the beautiful sharpness”

It was in 1337 when Kuniyasu Chiyozuru, a master swordsmith from Kyoto, came to the area of Echizen, seeking water suitable for metalworking processes and started making swords and sickles for farmers. The history of the famous Echizen forged blades had just began.  Local people started learning the techniques and then produce sickles, hatchets, and other bladed farming tools.

Takefu Knife Village nowadays is a cooperative association and consists of 12 knife companies where around 50 craftsmen work together to create great knives.

17 craftsmen among them are certificated from the state/country as the traditional craftsmen.

One unique aspect of Takefu Village is people from different generations work together where the youngest is 18-year-old, and the oldest, 80-year-old!

It was in the 1970s, when people started enjoying aging prosperity, after WWⅡ, and that was something that brought various changes in their lives as a result of the high economic growth and globalization.​

In this flourishing period for Japan, the young craftsmen of Echizen and continuators of the Takefu Knife Village tradition faced a serious problem.

The continuous growth of cheap mass production knives as well as the spread of stainless steel in knives led the hand-made knife industries which were mostly small family businesses to go out of business.

So, the took action and in 1973, they established the  Takefu Forged Blade Industry Study Society, a society created to talk about the future of Echizen knife and find a breakthrough solution.  Every night after their all day hard work, they gathered and talked about the problems and possible solutions.

The subsequent project after the establishment of TAKEFU KNIFE VILLAGE brand was to create the base for them. Even though they could complete new products, they still had worked separately in their own workshops and were so small, so they embarked on building for the new cooperative facility “TAKEFU KNIFE VILLAGE” to create more great Echizen knives and spread them throughout the world as well as training new generations.

In May of 1993, TAKEFU KNIFE VILLAGE was completed at last. A 300 million Yen project without any subsidies from the government

This was the beginning of a new era! 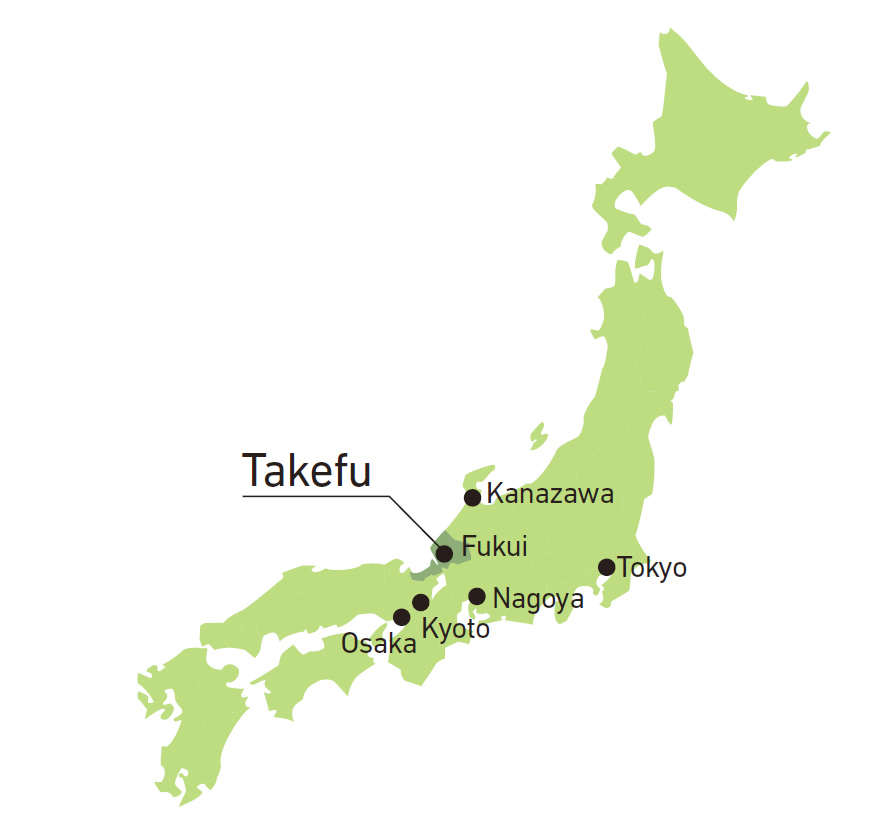 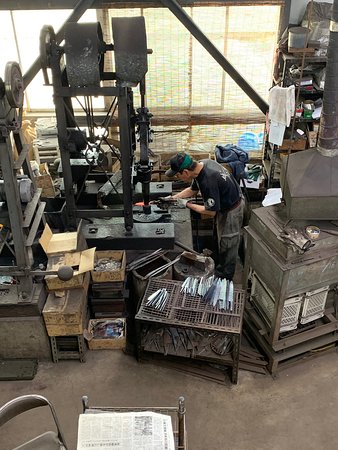 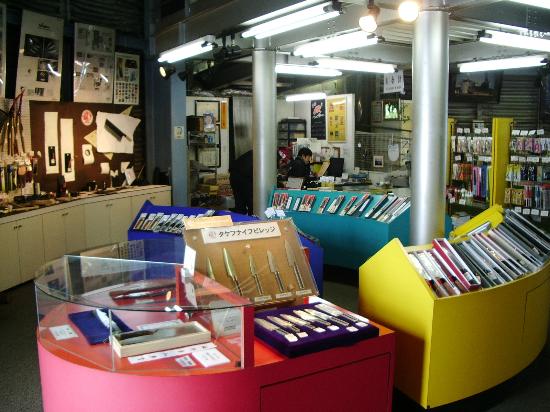 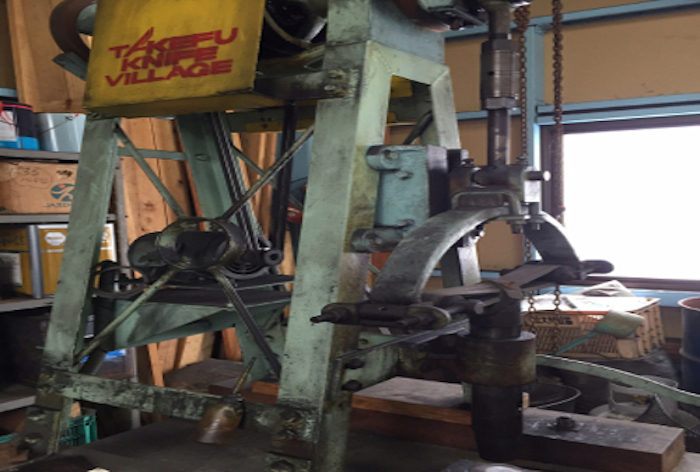 The knife industry in Sakai has a history of more than 600 years. It’s beginnings lie in the 15th century, when a group of knife blacksmiths (who were descended from swordsmiths) moved from Kaga Province (modern day Ishikawa Prefecture) to Sakai.

However, the foundations of the industry can be found way back, in the 5th century, where the are hosted  the largest burial mound in Japan, the Nintoku-Tenno-Ryo Tumulus. A group of craftspeople making iron tools such as hoes and plows took up residence in Sakai and expanded forging knowledge .

The opportunity to step up the production came in the 16th century. In that time period,  guns and tobacco imported to Japan from Portugal and Sakai took advantage their forging techniques by making guns and tobacco knives (used to cut tobacco leaves) . The sharp tobacco knives were particularly popular, so that they achieved  monopoly during the Edo shogunate (the samurai government during the 17th – 19th centuries). During the Genroku era (end of the 17th century), the single-edged style knives that remain a characteristic of Sakai knives,  were born .

These traditions have been passed down to the present day. 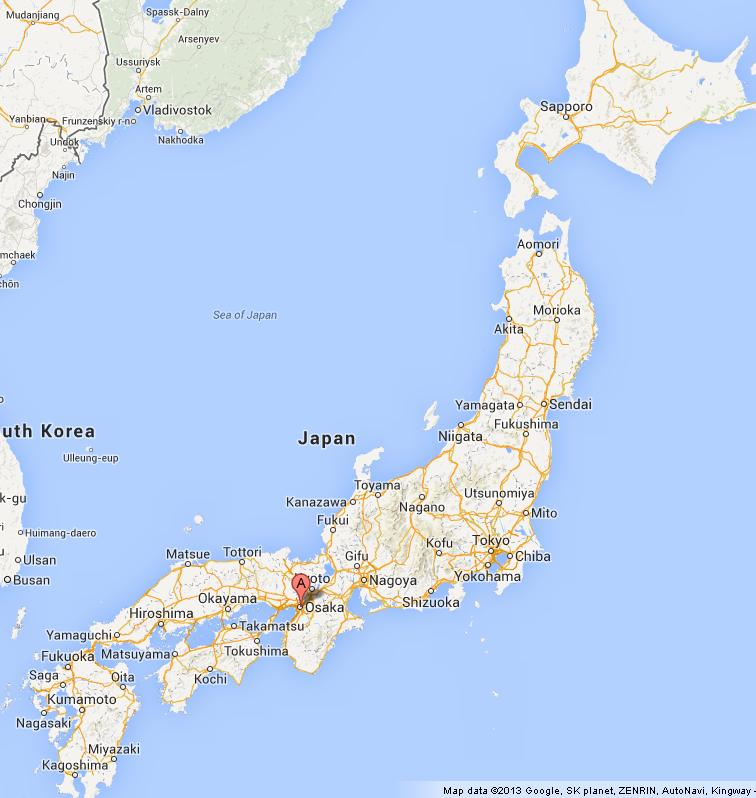 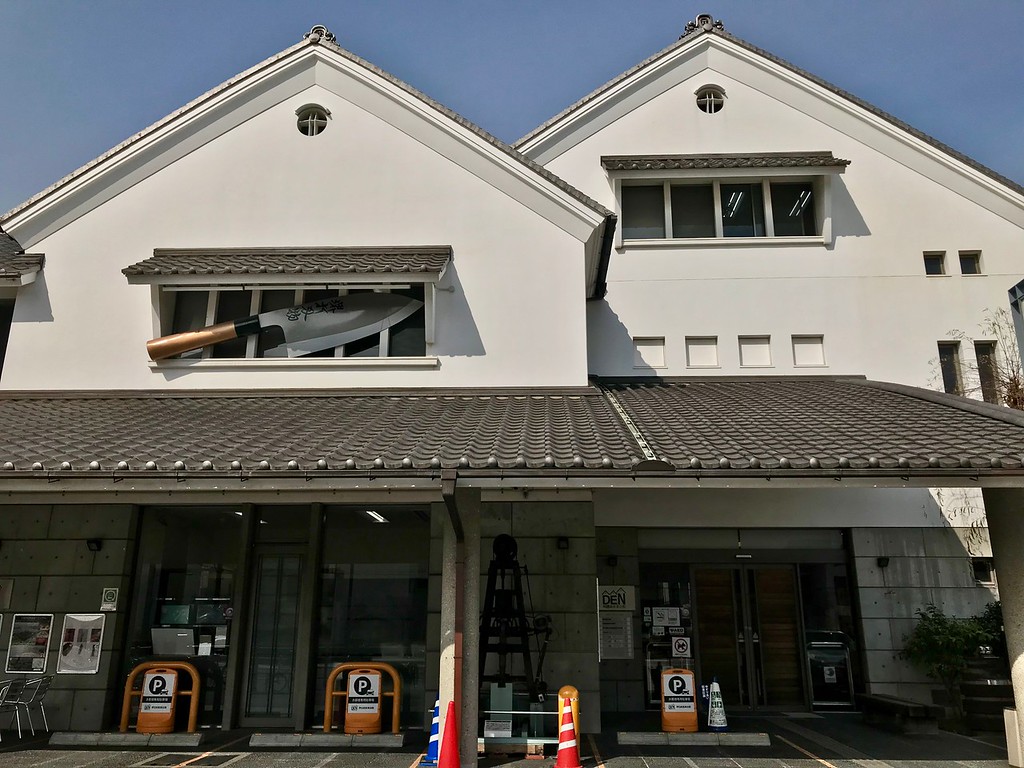 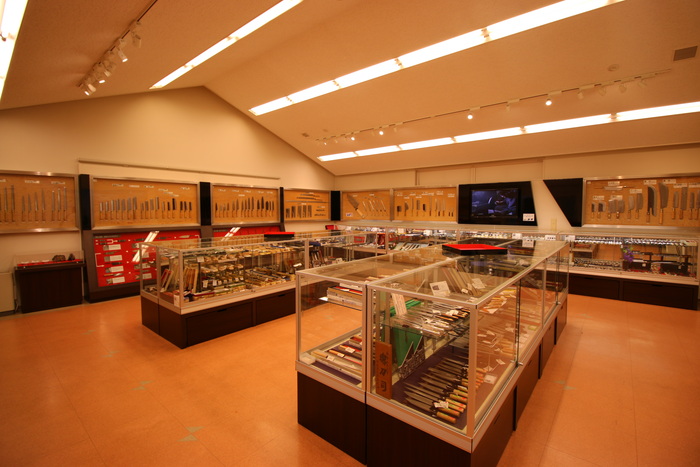 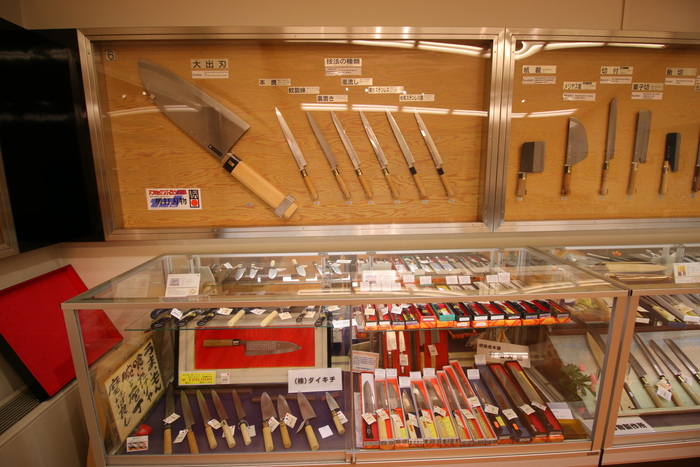 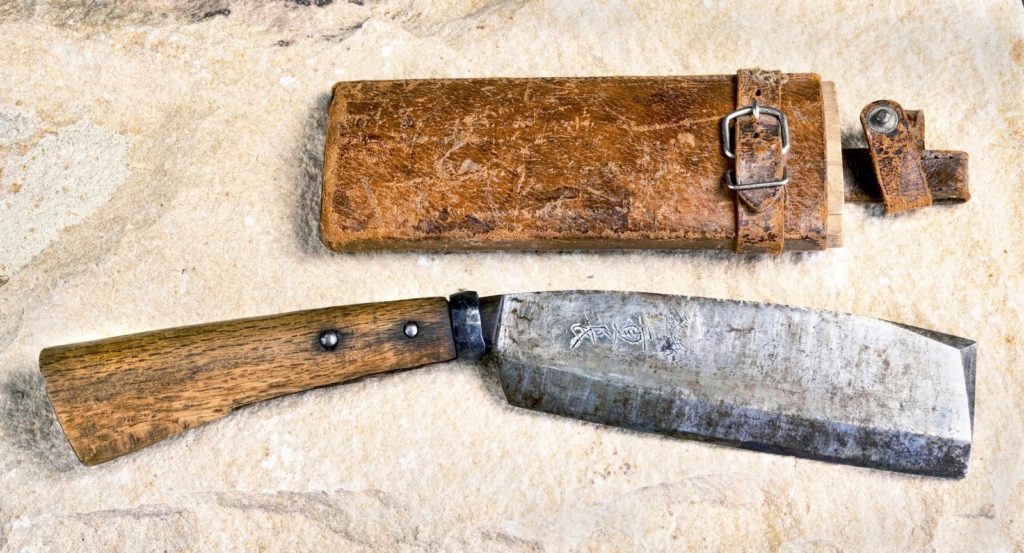 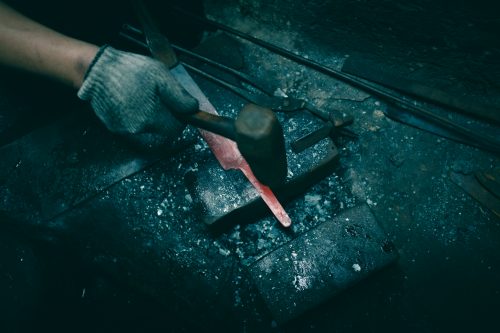 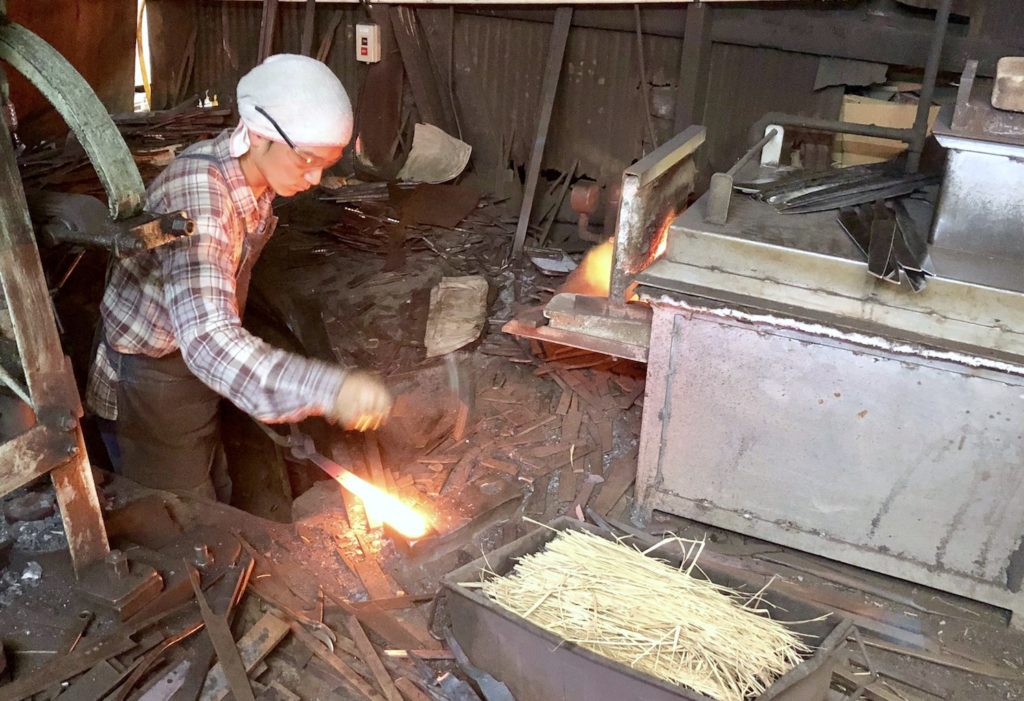 We are in the city of Seki, Gifu, also known as “the City of Blades”. Here, bladesmiths have been making swords, knives, and cutlery for 800 years. Located in central Gifu Prefecture, the town is cradled by two rivers. The pure water, the good river clay used in the quenching process, the abundant coal, and the strategic location helped establish Seki as a steel forging powerhouse.

Today, Seki has a great number of master knife and cutlery makers. The Seki Cutlery Association has around 60 members from which 10 are traditional bladesmiths. Licensed by the government to keep the art of Japanese swordsmithing alive, they are the only craftsmen allowed to produce katanas. The hamono (cutlery) culture runs so strong in the town that it hosts the Seki Traditional Swordsmith Museum, the small Seki Hamono Museum, an annual cutlery festival as well as countless knife factories and smiths, some of which are open to visitors. Seki is among the largest cutlery-producing areas in the world.

The first swordsmith of Seki emerged in the Kamakura period. It  was when the great swordsmith “Motoshige” moved to Seki and began the art of sword forging.

High quality blade clay, pine coal for the furnace, and  pure water of the Nagara River and Tsubo River where optimal for swordsmithing… Thanks to the ideal natural conditions of this area, many swordsmiths began to gather.

In the Muromachi period there were over 300 swordsmiths, and the swords of Seki became known throughout the nation as swords that were “strong, rigid, and sharp”!

The swords of Seki were favored among warlords during the Warring States period for their outstanding sharpness. The person who made the “Sekiden (swords forged in Seki)” famous was “Nidaime Kanemoto (Kanemoto the second)”, known as “Magoroku of Seki”.Kanemoto (Magoroku) developed an original sword forging technique called “Shihozume”(combining irons with different characteristics in four sections of the sword) in order to create amazingly strong swords. After this period Seki City prospered as the leading region of sword forging in Japan, and its excellent traditional skills are passed down to modern day swordsmiths as well as the blade manufacturing industry. Today Seki is also known to be one of the world’s most famous regions for blade manufacturing. 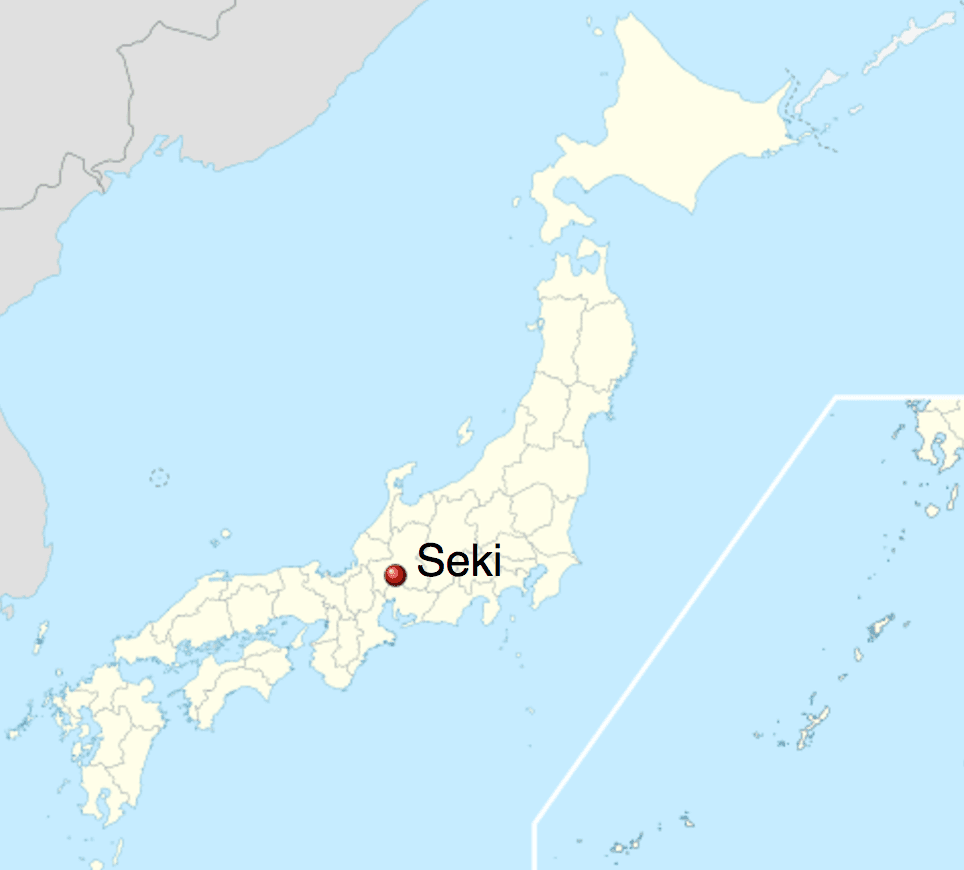 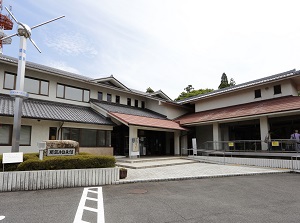 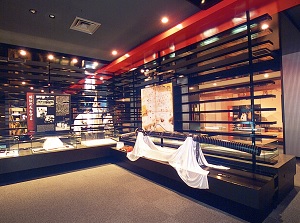 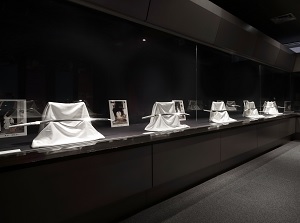 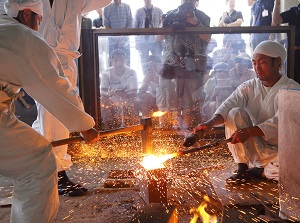 It was during the early Edo perios, back in 1625 that the local people in the city of Sanjo were suffering from the frequent floods of the Ikarashi river. A government official named Otani Seibei visited the area and decided to help the economy by inviting blacksmiths from Tokyo and encouraged the locals to concentrate on the production of steel nails that were much needed at that period.

As the time pssed by these blacksmiths developed more sophisticated techniques and turned to the production of sickles, carpentry tools, saws and knives.

The city of Sanjo is also known as the “town of blacksmiths”. 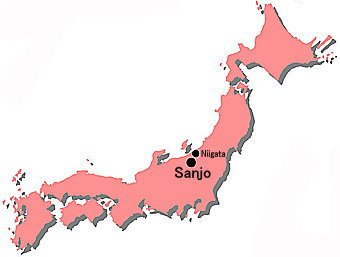 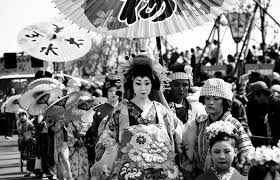 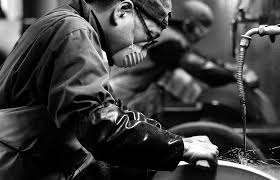